Every year around January 15th, all around the country we celebrate and remember the Reverend Martin Luther King Jr. and his contributions to the civil rights movement. Our beloved city Long Beach particularly celebrates by having an annual parade in his honor, this year would be the 34th Annual Celebration. Unfortunately due to covid we will be celebrating and viewing the parade virtually this year, but we wanted to give a few points as to why we hold such an important celebration. 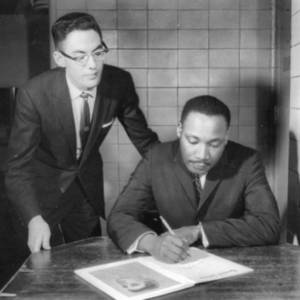 Starting in 1955, Montgomery’s Black community staged an extremely successful bus boycott that lasted for over a year. King played a pivotal leadership role in organizing the protest. His arrest and imprisonment as the boycott’s leader propelled King onto the national stage as a lead figure in the civil rights movement.
With other Black church leaders in the South, King founded the Southern Christian Leadership Conference (SCLC) to mount nonviolent protests against racist Jim Crow laws. Inspired by Mahatma Gandhi’s model of nonviolent resistance, King believed that peaceful protest for civil rights would lead to sympathetic media coverage and public opinion. His instincts proved correct when civil rights activists were subjected to violent attacks by white officials in widely televised episodes that drew nationwide outrage. With King at its helm, the civil rights movement ultimately achieved victories with the passage of the Civil Rights Act in 1964 and the Voting Rights Act in 1965.
In 1959, King returned to Atlanta to serve as co-pastor with his father at the Ebenezer Baptist Church. His involvement in a sit-in at a department 1960 presidential election between Richard Nixon and John F. Kennedy. Pressure from Kennedy led to King’s release.
Working closely with the NAACP, King and the SCLC turned their sights on Birmingham, Alabama in 1963, organizing sit-ins in public spaces. Again, the protests drew nationwide attention when televised footage showed Birmingham police deploying pressurized water jets and police dogs against peaceful demonstrators. The campaign was ultimately successful, forcing the infamous Birmingham police chief Bull Connor to resign and the city to desegregate public spaces. 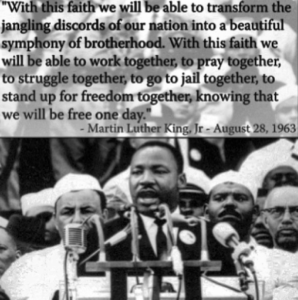 During the campaign, King was once again sent to prison, where he composed his legendary “Letter from Birmingham Jail,” in response to a call from white sympathizers to address civil rights through legal means rather than protest. King passionately disagreed, saying the unjust situation necessitated urgent action. He wrote: “Injustice anywhere is a threat to justice everywhere.… We know through painful experience that freedom is never voluntarily given by the oppressor; it must be demanded by the oppressed.”

In 1963, King and the SCLC worked with NAACP and other civil rights groups to organize the March on Washington for Jobs and Freedom, which attracted 250,000 people to rally for the civil and economic rights of Black Americans in the nation’s capital. There, King delivered his majestic 17-minute “I Have a Dream” speech.
Along with other civil rights activists, King participated in the Selma-to-Montgomery march in 1965. The brutal attacks on activists by the police during the march were televised into the homes of Americans across the country. When the march concluded in Montgomery, King gave his “How Long, Not Long” speech, in which he predicted that equal rights for African Americans would be imminently granted. His legendary words are widely quoted today: “How long? Not long, because the arc of the moral universe is long, but it bends toward justice.”
Less than six months later, President Lyndon Johnson signed the Voting Rights Act banning disenfranchisement of Black Americans.