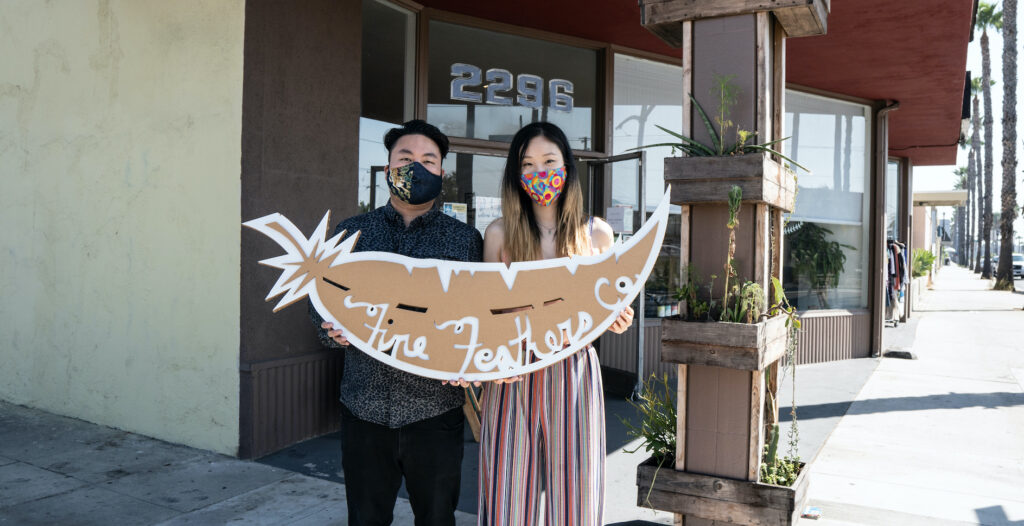 I was only recently introduced to Fine Feathers Kombucha when I was visiting Sura Korean Barbecue for a quick lunch. There was a carousel of floral and herbaceous sounding flavors ranging from Rooibos Palo Santo to Sencha Guayusa in the fridge. They were in aesthetically-pleasing cans with a matte label that felt fancy to the touch. I went for the rooibos drink as it was the only one with no caffeine (I’m caffeine-sensitive, don’t at me) and I was stunned by how tasty it was. My previous experiences with kombucha were always surrounded by thoughts of “oh, that tastes healthy” or they were the bland pasteurized abominations that I’d often find in the grocery stores (rhymes with meh-vita). Fine Feathers’ rooibos lacked the funkiness of straight kombucha and each sip just permeated with a delicate woodsy aroma. I decided to take the caffeine-induced anxiety risk and went to try some of the other flavors. They were all fantastic. Each drink was refreshing, sweet, and thoroughly enjoyable despite the presence of caffeine. So I asked Brandon, Sura’s co-owner, for more information and he told me that they actually were brewed locally out of the storefront in West Long Beach! But then I also found out that they were closing down as they were potentially going into red as the pandemic continued on. Fortunately, as of September 26th, it looks like Fine Feathers Kombucha Co. has a chance to rise again. 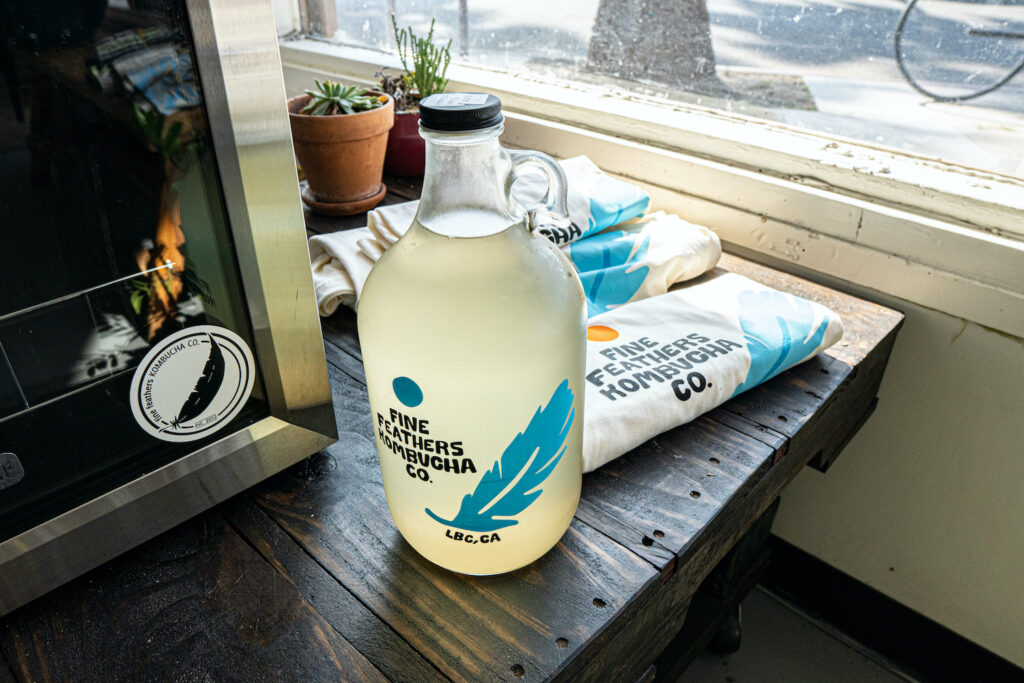 Fine Feathers Kombucha Co. is a charming storefront on the southwest corner of Long Beach Boulevard and 23rd Street that has been serving small-batch, handcrafted kombucha to locals since 2014. The idea came about when a wife and husband, Jodine Penev West and Jay Penev, started experimenting with fermentation and fell in love with the nuances involved in the brewing process. They first sold their brews out of a commercial kitchen in 2012 and when it became clear that the people of Long Beach were thirsty for some good booch, they decided to invest in a space where customers can come in and taste the various concoctions in a taproom setting.
Fast-forward to early this September. The news came out that Fine Feathers Kombucha Co. was going to close up shop and potentially end all operations. The challenge of keeping the integrity of their Certified Green and small-business-focused operation during the ongoing pandemic, and the restrictions it came with, brought about a situation that was no longer financially viable.


This is where Brandon and Claire Kim come in. They’re the owners of Sura Korean Barbecue and have been selling Fine Feathers’ lil’ howlers (their nickname for the 16 ounce cans) out of their restaurant for almost four years. They were deeply saddened upon hearing the news of Fine Feathers’ impending dissolution as they were longtime consumers of kombucha and avid fans of Fine Feathers. After mulling it over together, Brandon decided to reach out to Jodine and Jay and ask if they had any interest in potentially passing the torch. He was initially met with resistance, however, it became clear to them that their values aligned. At Sura, Brandon and Claire were adamant about the authentic and scratch-made execution of their food from fermenting their own mul naengmyeon (Korean cold noodle) to boiling bone broth for twelve hours daily. Their zeal for a quality food experience for their patrons convinced the Fine Feathers duo that the owners of Sura just might be the right path for keeping their special scoby alive.
After several meetings, Brandon and Claire officially became the new owners—and the legacy of Long Beach’s first and only kombucha operation continues on… 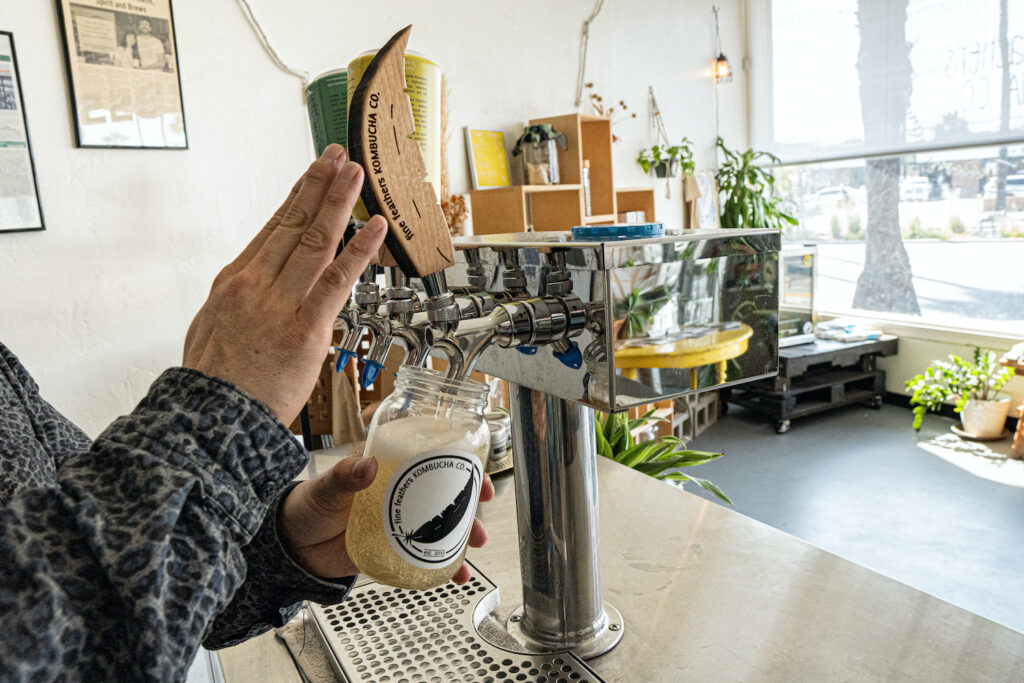 I’m ecstatic that Fine Feathers gets to persevere. You can call me macaroni, because I’m sticking their feather in my cap. I really really enjoyed their drinks. As a new fan, I had to drive on over to check out their storefront. It was really fun running into Brandon and Claire again at a different shop. They excitedly greeted me and went on to show me around the boho-chic space where we had an at-length conversation about their vision for Fine Feathers moving forward. Long story short, they’re keeping everything the same. Same process. Same helpers. Same look. Same taste. They’re fully aware of the devoted culture that Fine Feathers had created and have no interest in spoiling the batch. Yes, that’s a metaphor for the incredibly tight kombucha community here in Long Beach. And no, mother-of-glob, I’m not sorry for all of the kombucha puns. Anyway, I drank a few more cups of the good stuff and peeked behind the curtain and got a glimpse of the fermentation station. They’re keeping it all under wraps for now, but it’s quite the impressive operation to maintain quality and sustainability.
As they settle in, they hope to someday acquire the permission for outdoor seating and resume on-site kombucha flights for visitors. Until then swing on by and grab a lil’ howler, a meowler, or a growler and give the new owners some love. 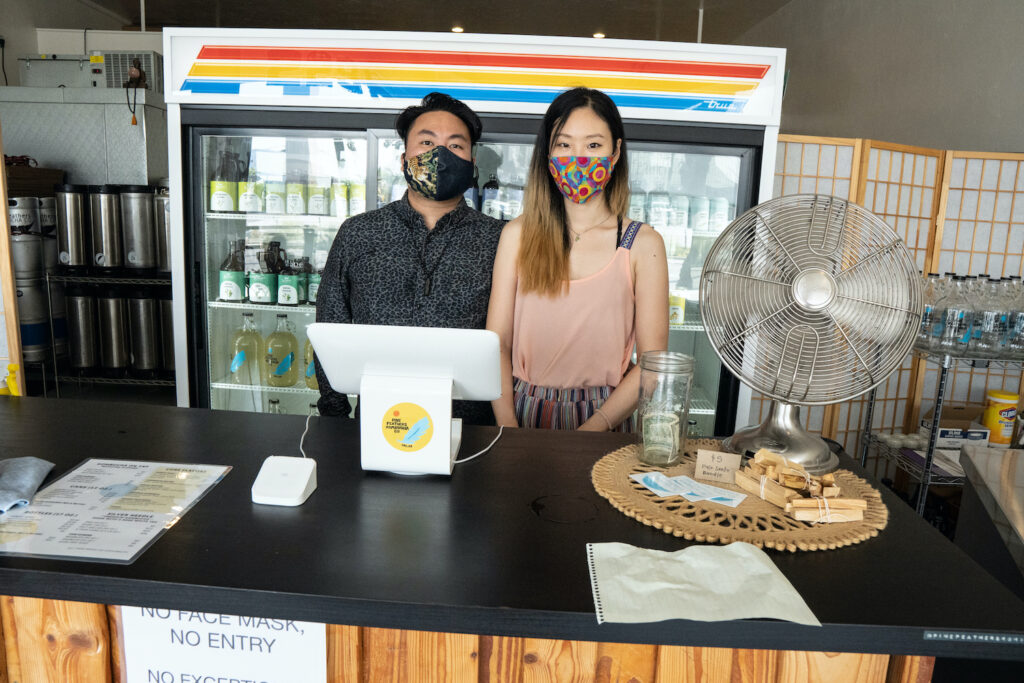 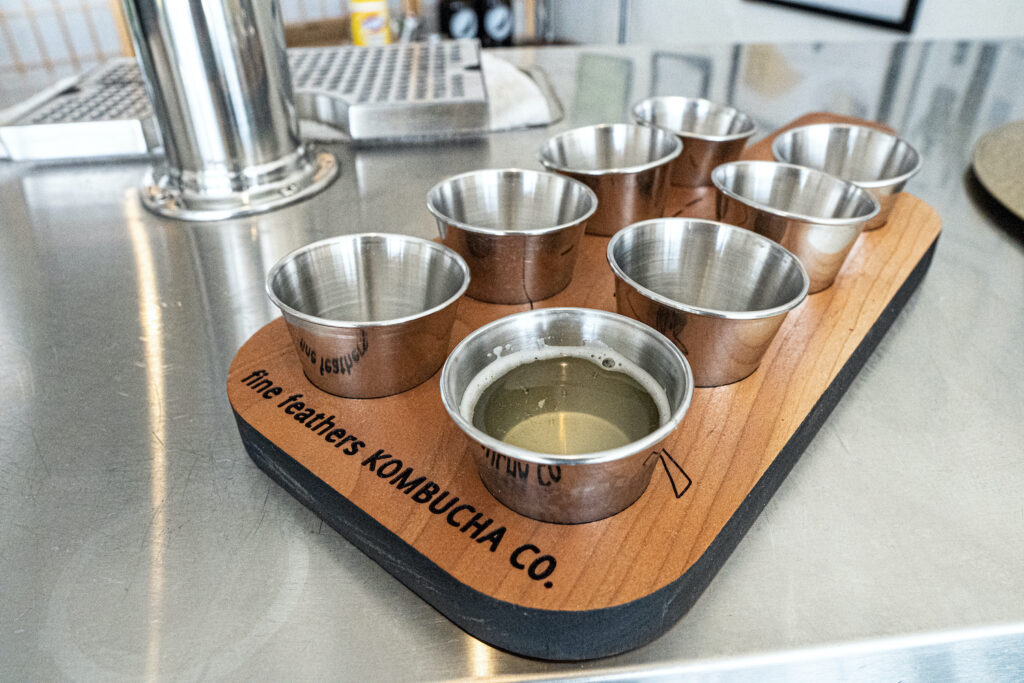 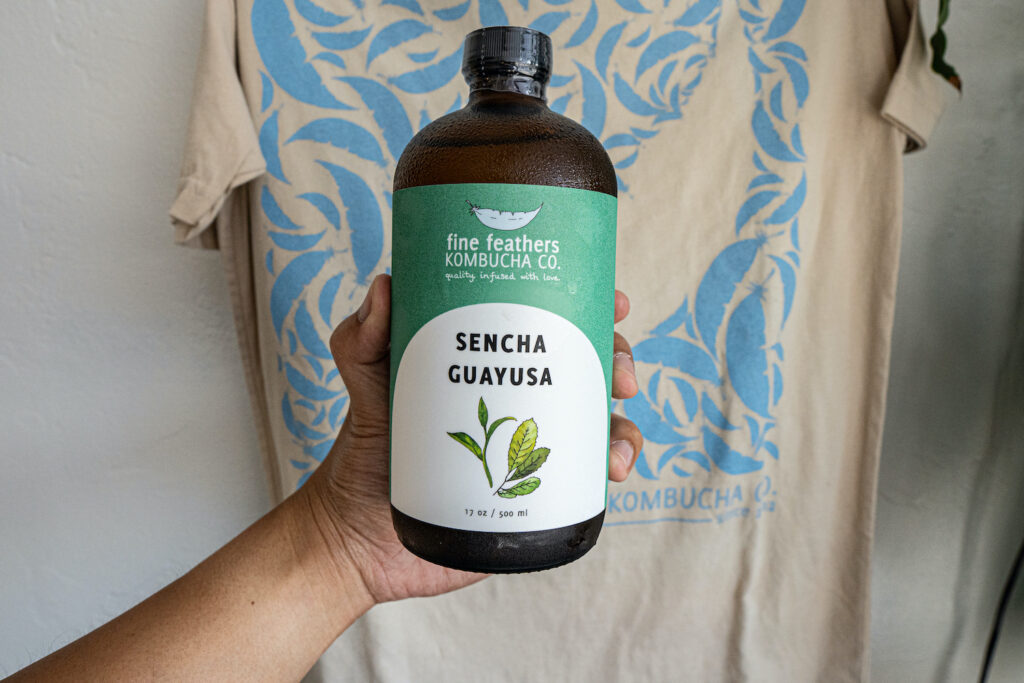 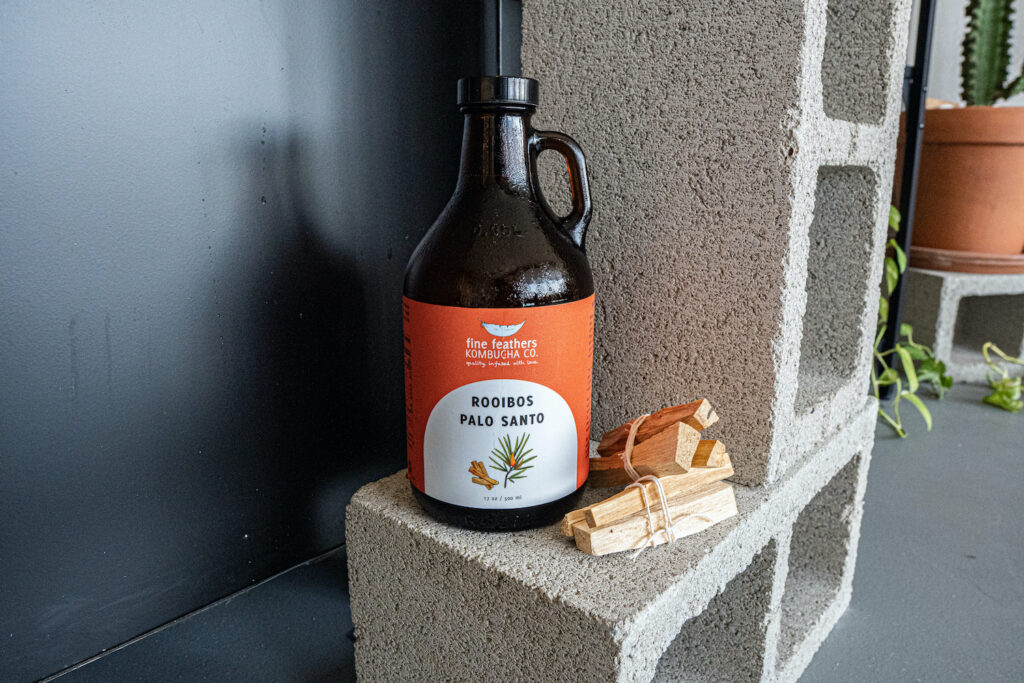 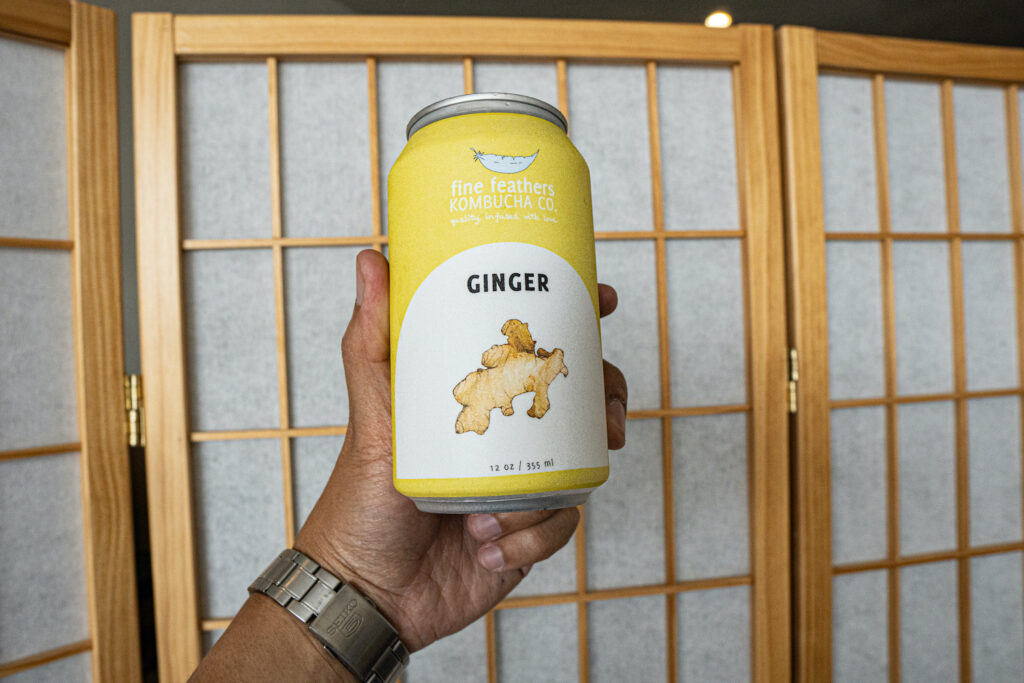 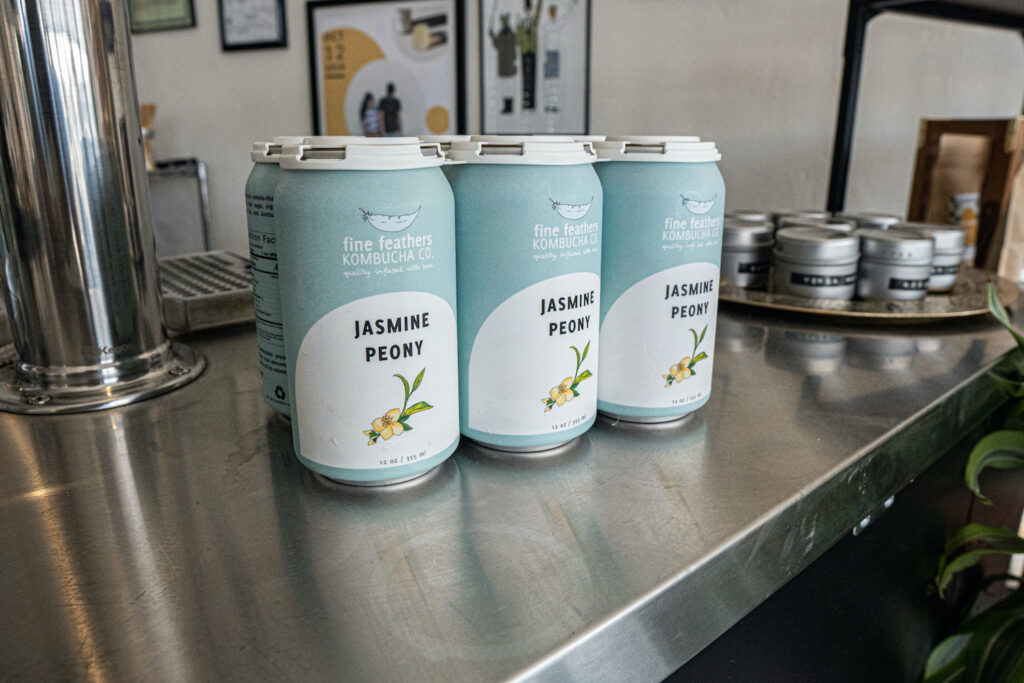 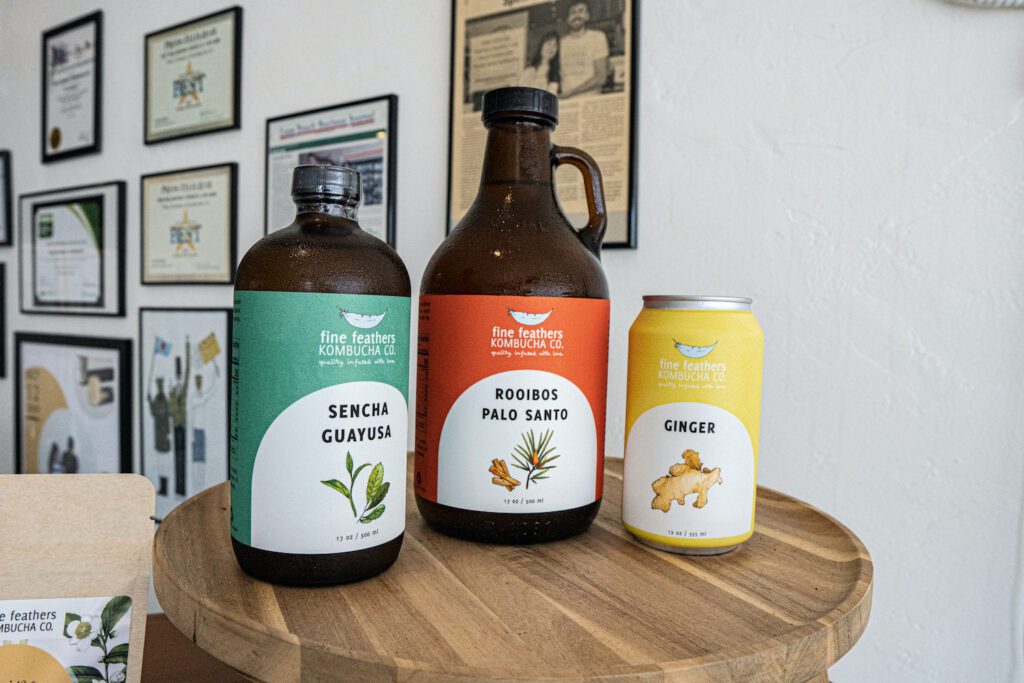